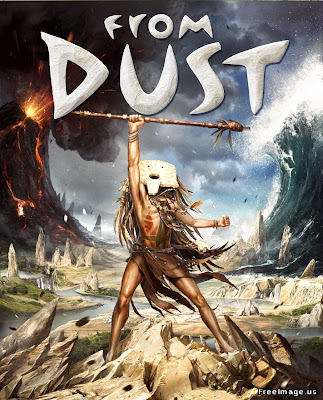 Have you ever wondered what it might be like to be a God? If From Dust is to be believed then it mostly involves shaping the land and looking after a tribe of raging idiots.

From Dust, the latest game from Eric Chahi, the maker of such games as Another World and Heart of Darkness, puts you in the place of a lesser God known as the breath with the ability to pick up and place earth, water and lava. Your task is to help an ancient tribe rebuild their civilization and restore the memories of their past by finding old relics and … growing plants.

In order to progress from one stage to the next you will have to guide the tribesmen to up to four giant totems so that they may establish villages and open the gate to the next area. As the game progresses these villages will give you additional powers such as the ability to freeze water in place or place an infinite amount of earth for a limited amount of time. As far as God games go the controls are surprisingly simple and make playing the game comparatively easy for consoles or those new to videogames.

Your control over the villagers is very limited, presumably to let the player focus on handling the elements. The ability to move villagers from one specific location to another (like a village or a relic) is, more or less, the extent of your control over them. The problem is that you can’t choose which route you want them to take which can often lead to the villagers taking a more dangerous route and end up having a close encounter with an active volcano. Of course you can use your powers to create a safer route but you’ll soon find that the AI is extremely picky. The tribe will refuse to build villages on an area if there’s even a drop of water in that village’s perimeter and will often stop and ask for help because they can’t climb over a piece of land that they should be able to scale easily. Fortunately you can help the villagers find spells to keep water, lava and fire at bay. It won’t solve all your problems (at some points the Repel Lava spell can end up forming a large wall of lava around your villages) but it will make things significantly easier.

The visuals are simply stunning especially for an XBLA title. The most impressive aspect is the way the core elements work; lava sizzles and forms new layers of rock over time, dirt settles and water foams and flows in a way so close to reality it has to be seen to believed.

If I had to pick the weakest aspect of the game it would have to be the story. It’s not necessarily bad but it’s told very poorly. Most of the history of the tribe is told in little text logs that you have to pause the game to access. I don’t mind a game with a story but you don’t buy an interactive medium to read a massive wall of text just so you know the back-story. However there seems to be an underlying message that helps make up for this; keeping the villagers safe in From Dust is an uphill struggle as the elements will almost always find a way to sabotage your plans. Build a wall around a volcano or dam a river and eventually the water and lava will just flow over them. In this game you can never really fight nature, you can only hope to work around it. While this can make the game incredibly frustrating it speaks volumes about the relentless power of nature and just how fragile humanity is.

Overall, if you can get past the steep difficulty curve From Dust is a pretty enjoyable game despite its flaws. It may not be a great game but if nothing else it’s worth a look.

From Dust is out now on Xbox Live Arcade and PSN. Points available from Amazon: